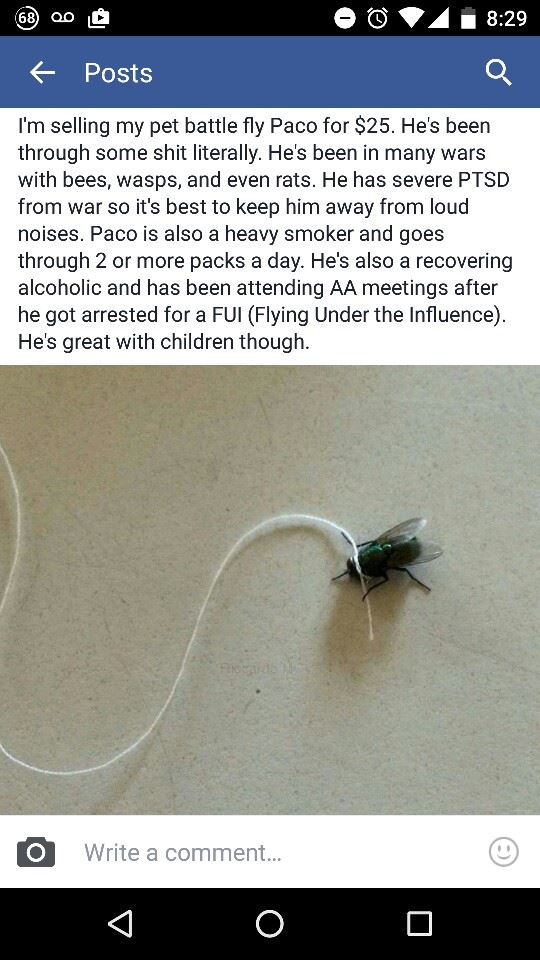 Battle fly has seen some shit.

I recently got in touch with my uncle's ex-wife, my Aunt L. I figure she's still my aunt, even if they divorced years ago. She's the mother of two of my cousins. She's been dishing about her life, which has been handy for clarifying and correcting information on that side of the family tree.

Yesterday I learned that my maternal grandmother committed suicide. I always thought it was odd that she died the same day my grandfather died. She was 10 years younger than him. My mother told me they both died of cancer, which is apparently untrue.

Aunt L says: "He [my maternal grandfather] died of cancer, R [my maternal grandmother] called M [my cousin, who is 4 years older than me] to come over as he was at home and she was afraid he was dying. When M went in confirmed he was gone, and went to the other room to call the police and hospice who had been taking care of him she went into the bedroom and shot herself in the head. I'm in SJ, M is with your grandparents at their home in Marina and being handcuffed by the police due to the shooting. I called B [my uncle, her ex-husband](a huge rarity) finally got thru the wife and got him on the phone and explained the situation - he didn't want to go there as he wasn't talking to them. Finally agreed and went and explained the situation, as well as the hospice nurse showing up and saying yes Mrs. M always talked about suicide if he died before she did.... It was truly an ugly, ugly situation. They were both cremated and their ashes scattered down the Big Sur Coast where they used to go for a ride most evenings and listen to the opera which she loved. Hope you have heard some version of this before, if not hope you are not too shocked. Don't know if your Mom even knows about how this happened or if Bill ever told her."

This isn't as much of a shock as you might expect. That side of the family is filled with mental illness, secrets and lies. My grandmother gave birth to my uncle when she was 17 -- that was under age to marry in California, and I've never been able to find her marriage license in all my genealogical research. My mother thinks she must have lied about her age and/or name to marry.

Still. I'm not in shock as such -- it's more just trying to process. These are grandparents I never met. I know there was stuff wrong with them I know my mother grew to adulthood with all kinds of issues of her own, which she took out on me, my sister, my father, and others. When does mental illness in a family get fixed? I'm so glad that neither I nor my sister chose to have children. I suffer enough with biolar depression, and I wouldn't want to visit that on anyone else.

How terrible of my grandmother to visit that upon her grandson. How terribly, terribly selfish.

My young padawan, Will, was very good today. He helped me with grocery shopping, and while he did ask for a lot of junk food, I kept him to one item -- ice pops -- by reminding him that the plan was to get Dairy Queen if he was a good helper. He pushed the shopping cart and helped me bag groceries. I also had to remind him a couple of times that he's only at my house more than a couple of days at a time, so a lot things he asked for didn't make sense. He was actually really good about that.
On the way to Walgreen's we saw a turtle in the road (I think it was a wood turtle). I stopped the car, so Will and I could rescue it. He was really pleased that we did that. He said, "Nothing can stop us now!"
We got a couple of odds and ends at Walgreen's -- where he was again super helpful, trying to help me calculate the least expensive dishwasher detergent. While that may sound advanced for a 6-year-old, he actually did pick out the least expensive sliced cheese at the grocery store before. He's really trying to help.
Then a quick stop at Dairy Queen, and errands were done.
We later learned that Will really loves tater tots with cheese on them. I can't argue with that. If I'd known that I would have bought 2 bags of frozen tots! It's hard to get him to eat sometimes, but these he had two servings.

I’ve been thinking a lot, but doing, not so much.

Dealing with a lot of pain and fatigue.

Thinking isn’t all bad. I mean, I get ideas.

I still want to pick apart the video for “A Different Story.” As I said to R, I feel kind of a kinship with Peter Schilling, perhaps because of bipolar disorder. He had to be committed briefly. I know that magicians swim where madmen drown and all that, but madness may sometimes be what happens when one understands too much too soon.

Can’t be too soon for me. I am already 50. I only have but so much time left on this planet. Admittedly I want to live to be at least 93, but wanting and doing are not the same thing.

Anyway, a friend once described K&C as getting a full download of all the world’s knowledge, all at once. Wouldn’t that make someone crazy, if that person wasn’t ready for that knowledge?

Do I think I will go crazy, as some say Fr. Achad did? Nah. Do I think I’m sane by “normal” standards? Probably not. On the other hand, my prescribing psychiatrist seems to think I’ve got a good head on my shoulders. Maybe I am swimming. The trouble is I need to move on to the deep end if I’m to get anything serious done.


I always feel like an idiot writing down my "deep thoughts" because in the world there are no new ideas, and someone very likely thought the same things before I did. What's "aha!" to me is no doubt "duh!" to another.

I friended my aunt (one of my mother's brother's many ex-wives) and cousin on Facebook. Of course my aunt immediately asked about my mother. I responded with contact information but was as noncommittal as I could be, because she doesn't need to know I've decided just not to communicate with my mother anymore if I can help it.

I’m sure I had other thoughts, but “Beautiful Creatures” was on TV and I wanted to watch it.

I think if my HGA felt like contacting me, he might not even be able to get past all the gunk in my sinuses. Seeing the doctor tomorrow. Made a butt-ton of chicken soup, so that helps.

I'm sort of half watching film noir with the sound off. I love those cars.

I need to remind myself that it's better to record what little I have to report, rather than nothing at all.

I'm sick with what is either allergies or a virus. Sore throat, stuffy nose, misery. Took guaifenesin

Calls I need to make tomorrow

I also need to pack for the Gnostic Mass at Turtle Hill's Beltane.

This entry was originally posted at http://chickgonebad.dreamwidth.org/1274356.html. Please comment there using OpenID.

This entry was originally posted at http://chickgonebad.dreamwidth.org/1273887.html. Please comment there using OpenID.

No doubt you wish to see the drawing room, as I've promised.

This entry was originally posted at http://chickgonebad.dreamwidth.org/1273672.html. Please comment there using OpenID.
Collapse